Briefly and informally about me

Professional CV, including bibliography and courses currently taught at the Faculty of Arts, Charles University

Profile on Academia.edu with my academic texts

Board games I have published with a team of colleagues

Briefly and informally about me

I was born in 1979 in Prague, during the period of deep “normalization” (the intensification of communist regime after the Prague Spring). My father was a political prisoner and an anti-regime minded person, which has remained with him to this day (www.gnostica.cz). I spent my childhood in Letná in Prague. Thanks to my father’s interest in oriental philosophy and the fact that my mother was (and is) an antiquarian, I was surrounded at a young age by books on mythology, religion, old prints and all sorts of samizdat writings in the style of “native Czech mysticism and philosophy”. But the most precious of all samizdat for me at that time was The Lord of the Rings, which my parents acquired from the dissident circles. The solemnity, kindness and beauty of that book had a lasting impact on me and still nourishes me today. Aside from The Lord of the Rings, the books that most influenced me as a child were The Neverending Story (Michael Ende), The Thirteen Clocks (James Thurber) and Journey to the West (Wu Cheng’en).

In high school, I went to Jan Kepler Grammar School, which was (and is) an extremely stimulating environment. Unable to completely separate myself from that great place, I returned there periodically for years after graduation to teach World Religions and Fundamentals of Linguistics electives in an effort to help inspire the next class of students. The literature that most influenced me in high school included, on the one hand, philosophers like Friedrich Nietzsche and Ladislav Klíma, as well as C.G. Jung and Mircea Eliade, and I also read Carlos Castaneda and Stanislav Grof with enthusiasm. And besides that, countless classic science fiction and fantasy authors.

In 1998, I was accepted to study a combination of Latin and Religious Studies at the Faculty of Arts, Charles University. The old dead languages have always fascinated me, and so, in addition to Latin and Greek, I also learned Sanskrit – first at home with my father, later at the faculty – as well as Biblical Hebrew and finally Old Norse. In all these languages I eventually worked my way up to independent readings of primary sources, which was the real reward for the work, a kind of magical journey into other worlds. During my studies I discovered historical fencing and soon pursued it with an intensity that rivaled (and sometimes complicated) my academic progress. More on that in my personal medallion here. 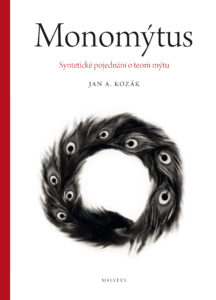 I have always had comparative tendencies in religious studies, not enjoying being a detail-expert on one little scripture that he knows everything about, even though, thanks to a fair philological grounding in Latin, I have come to understand that sometimes it really is an “iota,” a single misinterpreted letter, which matters. At first I specialized in Indian religions in addition to the Classics, but after a few years I changed my specialization to Old Norse culture – influenced both by Jiří Starý’s teaching and my Tolkienist side.

My knowledge of the source languages and my original specializations in Rome and India left me with the ability to get a basic overview of the Indo-European cultural complex. Theoretically-methodologically, I am perhaps most influenced by the religious scholar Radek Chlup, whose systematic thinking about the function of myth and ritual has always been a healthy complement to my intuitive and psychologizing perspective.

The second distinctive line that I have developed over the years has been a depth-psychological approach, especially the ideas of the classics, Freud and Jung. I studied the works of both authors and developed my own amalgam of understanding in which these two authors complemented each other excellently with the models developed by anthropology, semiotics and phenomenology. The analytical psychologist Martin Skála was the impetus for my Jungian orientation, and to him was addressed the first draft of the text that eventually became a book called Monomyth (Malvern 2021). 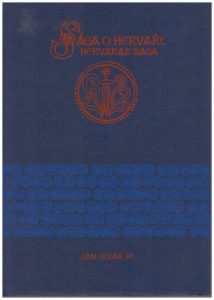 Thanks to the unwavering support and collaboration of Jakub Hruska, the world of Sirania (www.siranie.net) exists, an ever-enriching and evolving alternate universe with its own history, play of forces and stories. Lucie Lukačovičová, among many others, has contributed to this creation by writing a number of short stories set in the world of Sirania. Together with Jan Dřevíkovský, we created a mystifying comic called The Sprouting of the Eye, which was once published in print, but its sequel was never completed. Several board games that we developed in the Circle of Friends also date from a similar era – the game Dorn and its expansion and the game Ekopolis.

In 2009, I started my PhD studies, during which time I focused on a detailed study of Old Norse mythology. By that time, my two-volume book devoted to the Saga of Hervör, the Old Norse story of a heroic warrior woman and her son Heidrek, had already been published. The first volume is a bilingual (Old Norse-Czech) edition of the text, and the second volume is a series of five separate studies on the saga, covering a range of topics (riddles and kennings, female warriors, Old Norse mounds, the battle of the Goths and Huns, etc.). 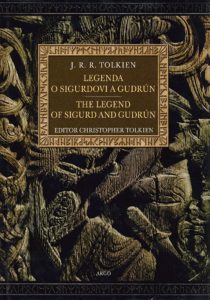 Not long after, I was entrusted with the translation of two of Tolkien’s epics, The Legend of Sigurd and Gudrun and The Fall of Arthur. I pushed for both books to be published bilingually as well. The results of my PhD project were then published in book form as Óðinn: Myth, Sacrifice and Initiation. During my doctoral studies, I discovered two authors who influenced me deeply, the Slovenian philosopher Slavoj Žižek and the American neuroscientist and physicist Douglas Hofstadter, whose Gödel, Escher, Bach still strikes me as an incomprehensible miracle.

Not long after completing my PhD, I was awarded the prestigious Marie Sklodowska-Curie Fellowship and spent the years 2018-2020 at the University of Bergen, Norway, where I explored body symbolism and metaphor in Norse mythology. I organised or co-organised a number of workshops and conferences as part of the project, and it was a very international time indeed (I burnt through a lot of aviation petrol while travelling the world in a very non-organic way).

After returning from Norway I joined the Department of Philosophy and Religious Studies at the Faculty of Arts, where I am still working.

Together with my return to the Czech Republic I started training in analytical psychology, which I have always been very close to.

Because of the similarities between ancient myths and contemporary conspiracy theories, I began working on them professionally in 2021 and, together with colleagues, founded the Conspiracy Theory Research Group, which brings together scholars across a range of disciplines, many of whom have been working on the topic much longer than I have. Our intention is not to debunk conspiracy theories, but to try to understand their formation and operation, much as religious scholars do with religion and mythology.

What remains are a few small details that did not fit into the overview: 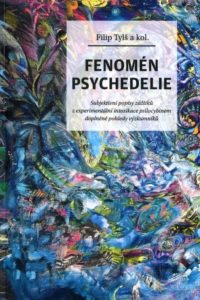 I have observed an interest in self-development and self-transcendence in myself since childhood. The world of normalcy is a bit scary and exhausting and I can’t find meaning in it, although I understand that somehow there has to be in order for things to “work”, but bare functioning without some form of transcendence is not a full life for me. Hence religious studies, hence fantasy, hence the study of depth psychology. Back when I was 19 (1998) I participated in holotropic breathwork seminar as part of my self-exploration, the experience was rather non-transformative. A few years later I had my first LSD session, which in contrast was significantly transformative. I came to see that ordinary consciousness is just one of many possible ways of thinking, and as a result it opened up previously unknown horizons of thought and experience. Over the years I have undergone a number of consciousness-altering sessions, not only with the help of psychedelics, but also, for example, isolation in the dark (dunkeltherapie). I consider experiences of this type – like the classics of psychedelics – to be an extraordinary tool for uncovering aspects of the workings of the human psyche that are not otherwise generally available. Thus, as soon as I learned of the existence of the Czech Psychedelic Society ( https://czeps.org), I immediately became a member, because the goals of this society are also my goals: to work with mind-altering substances in a controlled, civilised, and sophisticated manner, whether the goal is to help depressed people, to broaden horizons and give relief to people in palliative care, or to self-develop healthy people. In this respect, I believe we are still at the beginning of the journey. Within Czeps, I have joined the expert section and published in the form of a chapter in the book The Psychedelic Phenomenon.

The Pirate programme has been very close to my heart since the birth of the party in Czechia. I participated in several early meetings in the very beginning, and in the first elections I already stood as a candidate, rather just to complete the list of candidates, without much chance of being elected. In later years I remained a supporter and eventually joined the party. Despite the fact that my values coincide more with early radical piratism than with the current conciliatory centrism, I still consider the Pirates to be the best organized and most democratic party in Czech Republic. Unfortunately, as much as I would like to, I am unable to take a more active part in the internal life of the party, because that would mean investing in it the amount of time correlative to another part-time job and I have none left.